Lace Ashburn was only twelve years old when she witnessed a murder behind Pandemonium’s grandeur – a strange, magical traveling show where admittance is hard to gain. With a dead Ringmaster and his murderer in jail, Pandemonium packed up and fled in the middle of the night, remaining missing for five years.

When Lace’s older brother steps up to take the throne of Falhaven, he announces not only the return of Pandemonium but an arranged marriage for her with their neighboring country’s prince. With less than a week to discover a way to keep her freedom from her fiancé, Lace finds her way 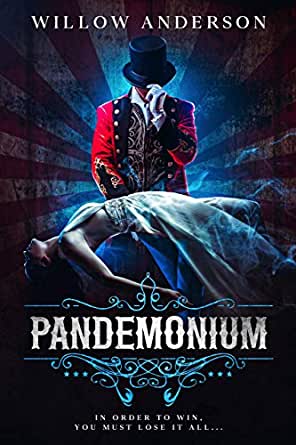 back into the heart of Pandemonium.

With a new Ringmaster heading Pandemonium, Lace is pulled into a competition run by the strange show with an invaluable prize at the end should she win. Paired together with a mysterious partner, Lace fights through the contest to keep not only her independence but her heart safe.

Come one, come all, to the show that will enthrall…welcome to Pandemonium where in order to win, you must lose it all.

I am so glad that I came across this book on bookstagram! I was initially attracted to the cover, and then I read the synopsis and became intrigued. I picked up a copy on Amazon, and I have no regrets. This book was amazing! It was super hard to put down, and I just wanted to keep reading. If you are a fan of Caraval, The Night Circus, or Forest of Stars, I think you will definitely enjoy this debut. I absolutely loved the atmosphere and the beautiful descriptive writing from Willow. The outfits that Lace wore sound to die for, and the places she visits are just magical.

The story follows Lace Ashburn, who is only twelve years old when she witnesses a murder at the Pandemonium magical traveling show. The Ringmaster is killed and the killer imprisoned, so the show packed up and disappeared for five years.

Lace’s brother Robert steps up to take the throne of Falhaven (oh yeah, Lace is a princess!) and announces the return of the show and the betrothal of Lace to their neighboring country’s prince. With only a week of freedom from her betrothed, Lace finds her way back to Pandemonium. There’s now a new Ringmaster and Lace is pulled into a competition with a prize at the end that she is desperate to win. She is paired with a mysterious partner for the competition, and she finds herself torn between her political duties, and her want for freedom. Lace is lucky to have her little sister Victoria, and friend Lucille at the palace, as things become quite sinister.

A book that is filled with mystery, mayhem, and magic, this is a debut that you won’t want to miss! It is available now, and the sequel Catalyst is forthcoming.

Willow Anderson was born and raised in west Texas where she learned early on to gaze at the stars and dream. She knew her life would eventually lead her to picking up a pen and letting her creativity flow. After leaving childhood behind, Willow found she was ready to explore away from the desert and left her small town behind. Soon after, she earned her RN initials behind her name but continued to do what she loved – writing. It wasn’t long until she met her current husband and brought him into her life for good. Now she travels wherever the Army takes her. Though she still keeps hold of her colorful imagination, she now has two teenagers and a pre-teen to help her imagination continue to thrive.
Willow is the author of the upcoming Pandemonium series that is available exclusively on Amazon. She writes YA fantasy and sometimes dabbles in the romance world.