Genre: YA Fantasy, YA Historical Fiction

Set in eighteenth century England, Samantha Cohoe’s debut novel, A GOLDEN FURY (Wednesday Books; October 13, 2020), follows a young alchemist as she tries to save the people she loves from the curse of the Philosopher’s Stone. The streets of London and Oxford come to life as this historical fantasy unravels. Weaving together an alluring story of magic and danger, Samantha’s debut has her heroine making messy decisions as she toes the line between good and evil while it becomes blurred. 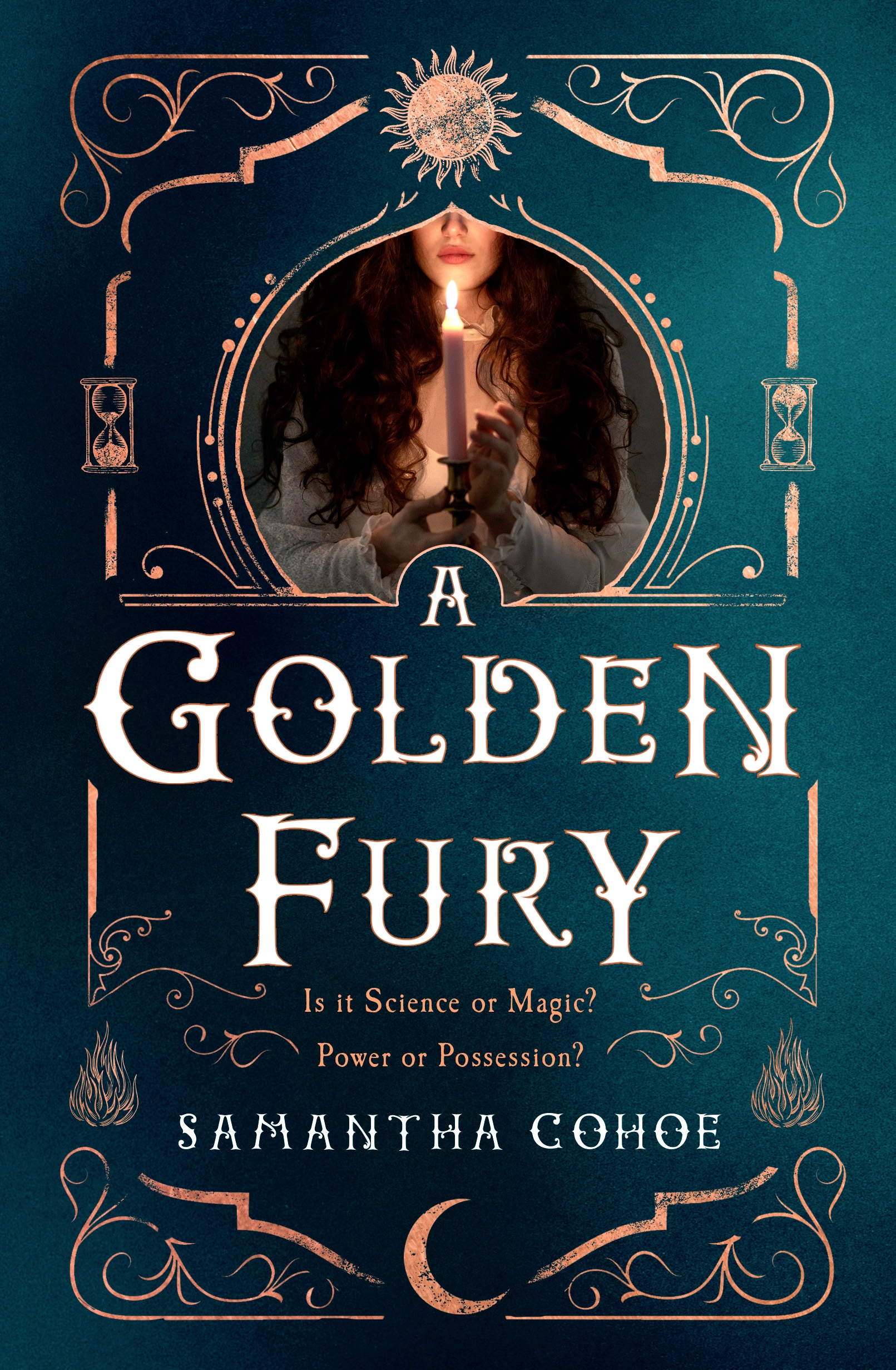 Thea Hope longs to be an alchemist out of the shadow of her famous mother. The two of them are close to creating the legendary Philosopher’s Stone—whose properties include immortality and can turn any metal into gold—but just when the promise of the Stone’s riches is in their grasp, Thea’s mother destroys the Stone in a sudden fit of violent madness.

While combing through her mother’s notes, Thea learns that there’s a curse on the Stone that causes anyone who tries to make it to lose their sanity. With the threat of the French Revolution looming, Thea is sent to Oxford for her safety, to live with the father who doesn’t know she exists.

But in Oxford, there are alchemists after the Stone who don’t believe Thea’s warning about the curse—instead, they’ll stop at nothing to steal Thea’s knowledge of how to create the Stone. But Thea can only run for so long, and soon she will have to choose: create the Stone and sacrifice her sanity, or let the people she loves die.

A GOLDEN FURY and the curse of the Philosopher’s Stone will haunt you long after the final page.

*I received an e-arc from Wednesday Books, St. Martin’s Press, and Netgalley in exchange for an honest review. Thank you for inviting me to be a part of the blog tour!*

A Golden Fury has an amazing setting, which starts out in beautiful 18th century France, and then moves to Oxford, England. Alchemy is such a fascinating subject (I haven’t read a book featuring it since I read the Bloodlines series by Richelle Mead), so I was super excited when I found out that that’s what this book is about! I thoroughly enjoyed the author’s descriptive writing about the different experiments.

Thea Hope is the seventeen year old daughter of Marguerite Hope, a famous alchemist in France. Thea dreams about being out from under her mother’s shadow and becoming an alchemist with her own reputation. She and her mother have been working on the Philosopher’s Stone, whose properties can grant immortality and can turn metal into gold. Just as they have the promise of the stone and all that comes along with it, Marguerite descends into complete madness and destroys the stone. As Thea combs over her mother’s notes, she discovers that there’s a curse on the stone that causes anyone who tries to make it lose their sanity. As the threat of the French Revolution looms, Thea is sent to Oxford to keep her safe. She is sent to live with a father who she never knew about, and who didn’t know about her either. Her only consolation is that her friend Will is living in London, and she hopes she will be able to see him again.

As Thea comes to Oxford, she discovers that the alchemists there don’t believe her warning about the curse, and won’t stop until Thea gives them the knowledge they need to create the stone for themselves.

I thought that Thea was relatable as she wants to prove herself to her mother, her father, and to the world at large. She lives in a time period where women really had to fight to make their own way, as their dreams and goals were not taken seriously by society. Throughout Thea’s journey, she goes through so much, and I liked seeing her growth from the beginning to the end of the story.

I was somewhat disappointed in the ending, as from my understanding, this is a standalone. I felt as though there were some loose ends that needed to be tied up, as I was left wondering about the fates of certain characters. It would be great to have a sequel in the future!

If you like books with historical settings, alchemy and some surprises thrown in, I think you would enjoy this book.

Samantha Cohoe writes historically-inspired young adult fantasy. She was raised in San Luis Obispo, California, where she enjoyed an idyllic childhood of beach trips, omnivorous reading, and writing stories brimming with adverbs. She currently lives in Denver with her family and divides her time among teaching Latin, mothering, writing, reading, and deleting adverbs. A Golden Fury is her debut novel.

“Sharply written with a crackling, compassionately determined heroine, A Golden Fury is a vivid ride through eighteenth century Europe with darkness and dread creeping at its corners. Utterly enchanting.”

“An engaging concoction of fantasy, romance, and historical fiction.” – Booklist

“Cohoe situates the supernatural among the historical, referencing the French Revolution and the Enlightenment while…keeping a sense of urgency as Thea struggles with the magical, demonic pull of the Stone.”

– Bulletin of the Center for Children’s Books

“The attention to detail in the story is excellent. Thea herself is a confident lead with a strong voice. A solid fantasy to

flesh out the world of alchemy that most readers know only from ‘Harry Potter.'” – School Library Journal

“Cohoe transmutes the legend of the Philosopher’s Stone into a dark, intoxicating tale of ambition, obsession, and sacrifice. Prepare for a magic that will consume you.”

“Steeped in mystery and magic, Samantha Cohoe’s A Golden Fury immerses readers in beautifully rendered world where magic and science mix, and where the intoxication of power can be deadly. Whip-smart Thea is a heroine readers will root for.” – Lisa Maxwell, New York Times bestselling author of The Last Magician