Genre: YA Fantasy, YA Paranormal

My whole world changed when I stepped inside the academy. Nothing is right about this place or the other students in it. Here I am, a mere mortal among gods…or monsters. I still can’t decide which of these warring factions I belong to, if I belong at all. I only know the one thing that unites them is their hatred of me.

Then there’s Jaxon Vega. A vampire with deadly secrets who hasn’t felt anything for a hundred years. But there’s something about him that calls to me, something broken in him that somehow fits with what’s broken in me.

Which could spell death for us all.

Because Jaxon walled himself off for a reason. And now someone wants to wake a sleeping monster, and I’m wondering if I was brought here intentionally—as the bait.

Crave definitely gave me those Twilight vibes, and I’m so here for another vampire book. Vampires are my jam! If you enjoyed the love triangle in Twilight, you’ll enjoy this one, as you know from the beginning who you’re going to be rooting for. The only thing that irked me about the book were all the references to boys being sexy AF, lol. I think that the last half of the book more than made up for it though.

After tragedy strikes, Grace finds herself in Alaska. She’s going to live with her uncle and cousin Macy at Katmere Academy and attend school there as well. Her uncle is the headmaster there. She quickly finds that this isn’t a regular boarding school, and that it’s very much like the tv show Legacies (which the author mentions in the book, loved the reference). She’s also entering into the middle of some turf wars between the paranormals. She’s trying to figure out where she belongs, but feels as though the only thing that unites them all is their hatred of her. Then there’s the vampire, Jaxon who carries a lot of secrets and hasn’t felt anything in a hundred years. Grace feels drawn to him, as they both have something broken in them.

A book full of lots of amazing characters, romance, humor, plot twists, and a fantastical setting. I’m so excited to start Crush!

New York Times and USA Today bestselling author Tracy Wolff is a lover of vampires, dragons, and all things that go bump in the night. A onetime English professor, she now devotes all her time to writing dark and romantic stories with tortured heroes and kick-butt heroines. She has written all her sixty-plus novels from her home in Austin, Texas, which she shares with her family. tracywolffbooks.com 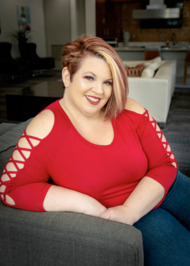