Nikolai Lantsov has always had a gift for the impossible. No one knows what he endured in his country’s bloody civil war—and he intends to keep it that way. Now, as enemies gather at his weakened borders, the young king must find a way to refill Ravka’s coffers, forge new alliances, and stop a rising threat to the once-great Grisha Army. 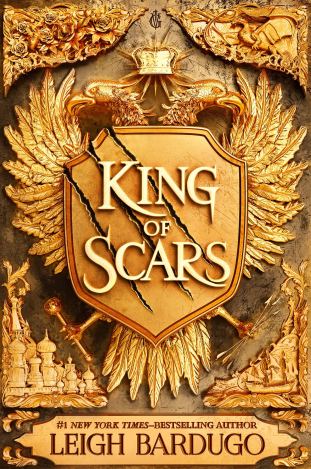 Yet with every day a dark magic within him grows stronger, threatening to destroy all he has built. With the help of a young monk and a legendary Grisha Squaller, Nikolai will journey to the places in Ravka where the deepest magic survives to vanquish the terrible legacy inside him. He will risk everything to save his country and himself. But some secrets aren’t meant to stay buried—and some wounds aren’t meant to heal.

I did a buddy read of King of Scars, and we dragged it out, as we didn’t want to have to be away from the Grishaverse too long. We read the other books in the series as well. The next one is coming out in March! It was great to be back in this world again, and with these characters. It was so good to be in Ravka and to see what has happened there after all the time that has passed.  I highly recommend reading the Shadow & Bone Trilogy and Six of Crows duology before reading King of Scars, as you will be confused and there are definitely some spoilers.

This one was narrated by Nikolai, Zoya, Nina, and Isaak. It was great having all of their perspectives on what was happening. Nikolai is sassy as usual, and Zoya is fiercely loyal. I enjoyed Nina’s adventures as well with Adrik, Leoni, and Hanne. She seems to have found herself and her purpose again. I laughed and cried along with them through their adventures. Everything in this book was set up for an epic conclusion. I’m so invested in these characters and I can’t wait for Rule of Wolves! I’m also excited for the Shadow & Bone show coming to Netflix in April 2021.

Leigh Bardugo is a #1 New York Times bestselling author of fantasy novels and the creator of the Grishaverse (coming soon to Netflix) which spans the Shadow and Bone Trilogy, the Six of Crows Duology, The Language of Thorns, and King of Scars— with more to come. Her short stories can be found in multiple anthologies, including the Best American Science Fiction & Fantasy. Her other works include Wonder Woman: Warbringer and Ninth House (Goodreads Choice Winner for Best Fantasy 2019) which is being developed for television by Amazon Studios. Leigh was born in Jerusalem, grew up in Southern California, and graduated from Yale University. These days she lives and writes in Los Angeles. For information on new releases and appearances, sign up for her newsletter.

One thought on “King of Scars: Review”