Hunted across the True Sea, haunted by the lives she took on the Fold, Alina must try to make a life with Mal in an unfamiliar land, all while keeping her identity as the Sun Summoner a secret. But she can’t outrun her past or her destiny for long.

The Darkling has emerged from the Shadow Fold with a terrifying new power and a dangerous plan that will test the very boundaries of the natural world. With the help of a notorious privateer, Alina returns to the country she abandoned, determined to fight the forces gathering against Ravka. But as her power grows, Alina slips deeper into the Darkling’s game of forbidden magic, and farther away from Mal. Somehow, she will have to choose between her country, her power, and the love she always thought would guide her—or risk losing everything to the oncoming storm. 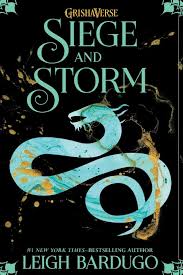 This book picks up where Shadow and Bone ended. Alina and Mal are now living in an unfamiliar land. Alina soon finds out that she can’t escape her destiny. The Darkling has emerged from the Shadow Fold with a new and terrifying power. Alina and Mal soon gain the help of a privateer and return to Ravka to fight. Alina finds herself slipping into the Darkling’s dangerous game and drifting farther apart from Mal. Things become quite complicated and Alina has many difficult choices to make.

Siege and Storm is an amazing sequel and I loved living in the beautiful world that Leigh Bardugo created. The atmosphere of the book is just so lush and gorgeous. I enjoyed Alina’s journey as she grows so much, and learns so much more about herself and her power. She and Mal work through a lot of things in this book as well. I think one of my favorite parts of the story, is the introduction of Nikolai. He quickly became a new favorite, with his sass and sense of humor.

The ending of the book is nail biting, but satisfying. Definitely sets everything up for the third and final book in the trilogy.

Leigh Bardugo is a #1 New York Times bestselling author of fantasy novels and the creator of the Grishaverse (coming soon to Netflix) which spans the Shadow and Bone Trilogy, the Six of Crows Duology, The Language of Thorns, and King of Scars— with more to come. Her short stories can be found in multiple anthologies, including the Best American Science Fiction & Fantasy. Her other works include Wonder Woman: Warbringer and Ninth House (Goodreads Choice Winner for Best Fantasy 2019) which is being developed for television by Amazon Studios. Leigh was born in Jerusalem, grew up in Southern California, and graduated from Yale University. These days she lives and writes in Los Angeles. For information on new releases and appearances, sign up for her newsletter. 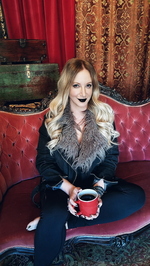 2 thoughts on “Siege and Storm Review”