Ever since she discovered her affinity for magic, seventeen-year-old Anouk has been desperate to become a witch. It’s the only way to save her friends who, like Anouk, are beasties: animals enchanted into humans. But unlike Anouk, the other beasties didn’t 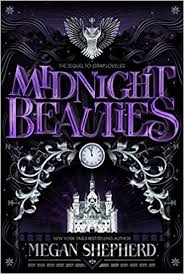 make it out of the battle at Montélimar in one piece.

With her friends now trapped in their animal forms, Anouk is forced into a sinister deal involving a political marriage with her sworn enemy, a wicked plot to overthrow London’s fiercest coven of witches, and a deadly trial of fire to become a witch. The price for power has always been steep in the world of the Haute. Now, it will cost Anouk everything.

Wicked and delightful, this spellbinding sequel and conclusion to Grim Lovelies is perfect for fans of The Cruel Prince and The Hazelwood Wood.

I absolutely loved the first book in this duology, Grim Lovelies, and the introduction to the beasties, witches, royals, and goblins. Megan Shepherd created such an amazing world and magic system, and I quickly fell in love with all the characters. Midnight Beauties was overall a good follow up to the first book, and I really cared about what happened to all of the characters and the world Megan created. It was a really fun and quirky read, and I enjoyed the ride. I particularly liked the first half of the book. I loved Anouk’s journey and the characters that she meets along the way. I feel like the conclusion is where things started to leave me feeling frustrated. It almost felt to me as though there should have been a third book, as there was so much going on in the ending and it felt a bit rushed. I did not see the twist in the end coming, and I think that’s what lead me to feeling disappointed. I just feel as though there was the potential there for more.

If you like a ya fantasy that’s different and one of a kind, then I think you’d enjoy this one.

New York Times bestselling author Megan Shepherd grew up in her family’s independent bookstore in the Blue Ridge Mountains. She is the author of several young adult and middle grade novels. She now lives and writes on a 125-year-old farm outside Asheville, North Carolina, with her husband, two cats, and an especially scruffy dog.