In Heather Kassner’s spine-chilling fantasy novel, reminiscent of Serafina and the Black Cloak, an orphaned girl chases a thieving boy into a magician’s land of starless, moonless gloom where other children have gone missing before her. 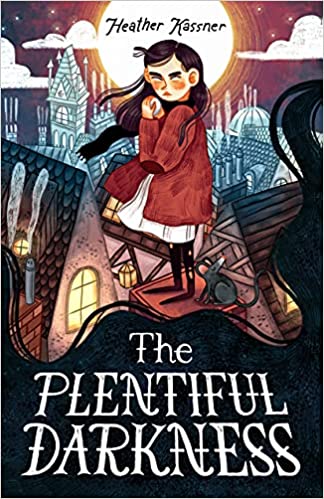 In order to survive on her own, twelve-year-old Rooney de Barra collects precious moonlight, which she draws from the evening sky with her (very rare and most magical) lunar mirror. All the while she tries to avoid the rival roughhouse boys, and yet another, more terrifying danger: the dreaded magician who’s been disappearing children in the night.

When Trick Aidan, the worst of the roughhouse boys, steals her lunar mirror, Rooney will do whatever it takes to get it back. Even if it means leaping into a pool of darkness after it swallows Trick and her mirror. Or braving the Plentiful Darkness, a bewitching world devoid of sky and stars. Or begrudgingly teaming up with Trick to confront the magician and unravel the magic that has trapped Warybone’s children.

“Gleams with an eerie magic, its characters burning bright and fierce. A visual treat of a tale.” —Stefan Bachmann, international bestselling author of Cinders and Sparrows

An utterly enchanting and magical tale, where I was completely swept away! Brilliant! Everything felt so vivid, real, and alive. This was my second book by Heather Kassner and she has found a lifelong fan.

Twelve year old Rooney de Barra lost her family to the feather flu. In order for her to survive on her own, she collects moonlight, which she draws from the night sky into her lunar mirror. She’s been trying to avoid the roughhouse boys who are her biggest competitors for the moonlight. There’s an even more terrifying danger on the streets though, a magician who has been disappearing children in the night.

Trick Aidan, her worst rival from the roughhouse boys steals her precious lunar mirror, and Rooney is determined to do anything to get it back. As she tries to track Trick down, she sees him be swallowed by a pool of darkness and jumps in after him. They find themselves in the Plentiful Darkness, a fascinating world without sky or stars. She is forced to team up with Trick to confront the magician, and to help the children of Warybone that have been trapped there by the magician’s magic.

If you like stories that are eerie and full of magic, twists and turns, friendships, and found family, you will love this one. A real page turner that I highly recommend!

3 thoughts on “The Plentiful Darkness: Review”