The first book in an epic, heart-pounding fantasy duology about two royal heirs betrothed to be married, but whose loyalties are torn, and a ruthless enemy who threatens their world, perfect for fans of Sabaa Tahir, Hafsah Faizal, and Renée Ahdieh.

Adraa is the royal heir of Belwar, a talented witch on the cusp of taking her royal ceremony test, and a girl who just wants to prove her worth to her people.

Jatin is the royal heir to Naupure, a competitive wizard who’s mastered all nine colors of magic, and a boy anxious to return home for the first time since he was a child.

Together, their arranged marriage will unite two of Wickery’s most powerful kingdoms. But after years of rivalry from afar, Adraa and Jatin only agree on one thing: their reunion will be anything but sweet.

Only, destiny has other plans and with the criminal underbelly of Belwar suddenly making a move for control, their paths cross…and neither realizes who the other is, adopting separate secret identities instead.

Between dodging deathly spells and keeping their true selves hidden, the pair must learn to put their trust in the other if either is to uncover the real threat. Now Wickery’s fate is in the hands of rivals..? Fiancées..? Partners..? Whatever they are, it’s complicated and bound for greatness or destruction.

* I won an e-arc from the author in a giveaway*

Amazing debut from Dana Swift! I was immediately swept up into this fantastical world where magic is cast in nine different colors, corresponding to their deities. The magic system was crafted so well, and I could envision the stunning colors swirling through these enchanting kingdoms. I also loved the rivalry to lovers trope and the slow burn swoon worthy romance. Yes please!

I absolutely adored the main characters, Adraa and Jatin. They first meet as children when their parents arrange a marriage between them to unite two of Wickery’s most powerful kingdoms. Their first meeting doesn’t go very well to put it bluntly. They continue to communicate through letters after, which become a competition between them, and they haven’t seen each other since that fateful meeting. They finally meet up again accidentally, and begin working together with secret identities, neither one realizing who the other is.  As they work with each other, they begin to uncover a sinister plot from the criminal underground. As things get dangerous, they must learn to trust each other in order to survive, which isn’t easy when they don’t really know who they truly are.

Adraa is fierce, yet flawed, and I really loved that about her. Jatin is also a strong character, and I love the witty banter between him and Adraa. I also enjoyed these characters connections with their families. Both Adraa and Jatin feel that they have to prove themselves to their families and their kingdoms respectively, and it was an interesting journey to behold.

Please do be sure to read the author’s heartfelt note where she clearly explains her inspiration behind the story.

I’m so glad that there’s going to be a second book! That ending!! I definitely need more of this wonderful world and characters. Definitely add this one to your TBR. It will be releasing in November of 2020.

Dana Swift started making up fantasy worlds when she was eleven years old and hasn’t stopped since. She graduated from the University of Texas at Austin, where she earned degrees in English and Advertising. While in college, Dana competed as a saber fencer and learned a thing or two about fighting, parrying and how it feels to fall in love with your sparring partner. She currently lives with said husband in Anaheim, California where Disney fireworks provide a nice musical backdrop to late night writing. 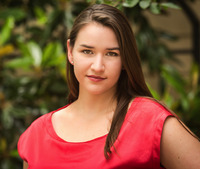 4 thoughts on “Cast in Firelight Review”